skip to main | skip to sidebar

I have just spent over an hour watching The Falling Man, a documentary about the search to identify a man who jumped from the World Trade Center. I never had the time or the bandwidth to watch the whole thing before. Or maybe I just never had the inclination: it's a terrible image, a terrible story. I had tears in my eyes several times while watching it, and had to pause the video for a few seconds each time.

Strangely, the video has never been released in the U.S.A. Or perhaps it's not so strange. The photo itself provoked heated public anger when it was published on September 12th, 2001. People just didn't want to be confronted with this imagery. A peculiar kind of media self-censorship ensued. Images like this were quickly replaced by heroic images of brave firefighters, dust-covered WTC survivors, a President standing in the rubble with a megaphone.

I am reminded of the Iraq War, and the War In Afghanistan, and how the media still refuses to show, or even acknowledge, the true horrors of such violence. Is it because a complicit media hides the truth from us? Or is it because their audience cannot handle the truth and does not want to know it? Perhaps a bit of both.

The parallel with war also makes for another interesting comparison. Why has the Falling Man been airbrushed out of history, while the Unknown Soldier is revered and remembered all over the world? Is it because the WTC jumpers were helpless victims, while soldiers are willing participants in the carnage that consumes them?

Here is another video of the jumpers:

Note the video of the plane hitting the second tower, just a few seconds into the clip. If you freeze it, the shape does not look much like a plane at all. Much more like a missile, in fact. Just look at these stills: 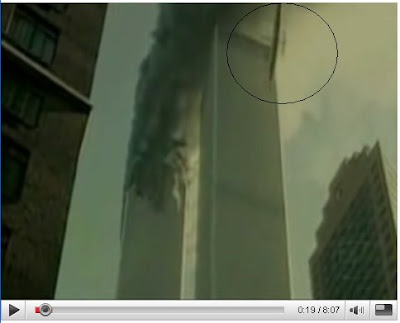 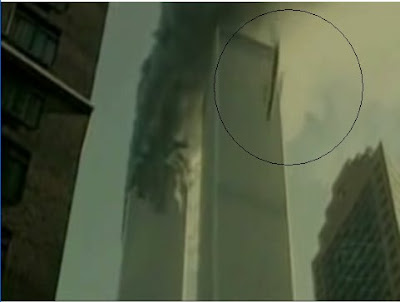 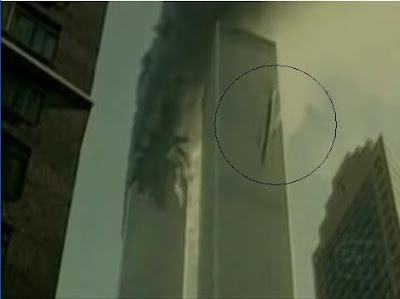 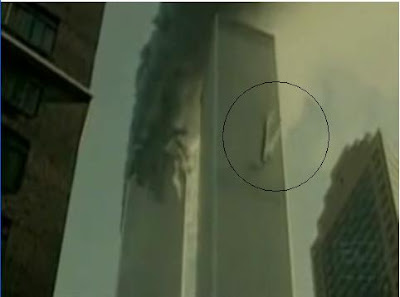 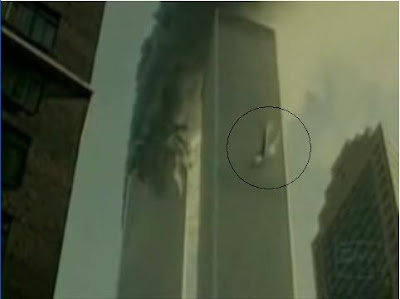 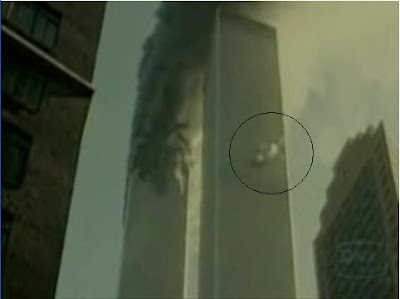 So what's the lesson?

Obviously, we cannot believe our lying eyes (if you watch the video instead of the stills, you can actually see the blurred flash of the airplane's wings).

Did you see a vicious terrorist attack on the USA, perpetuated by ruthless Al Quaeda killers? Did you see an assault on US power from a bearded religious zeolot in a distant land? Did you see two planes hitting two towers, and bringing three towers down?

Did you see the Falling Man? Or have you airbrushed him from your memory?

UPDATE: The original Esquire article on the Falling Man is here, if you are interested.

Bernard Weiner lists Twenty-Six Things We Now Know Seven Years After 9/11 (an annual update) including for example that the illegal and widespread domestic spying was ordered by Cheney and Bush seven months BEFORE 9/11. So was the planning for the Iraq War and the forgeries used to justify it. The anthrax was almost certainly being prepared in some lab, ready to be mailed out after 9-11, and the PNAC documents about the need for a "new Pearl Harbor" were of course published years earlier. And after seven years they still haven't found Bin Laden or even proved that he was behind the attacks.

Who is the Falling Man? He is you and me, my friend.

With a close friend of French President Nicolas Sarkozy now saying that the 9/11 attacks were not perpetrated by al-Qaeda, a new global poll finds similar skepticism:

A new WorldPublicOpinion.org poll of 17 nations finds that majorities in only nine of them believe that al Qaeda was behind the 9/11 terrorist attacks on the United States.

In no country does a majority agree on another possible perpetrator, but in most countries significant minorities cite the US government itself and, in a few countries, Israel. These responses were given spontaneously to an open-ended question that did not offer response options.

Jean-Marie Bigard is a famous French comedian and The Independent calls him "a member of Mr Sarkozy's inner circle of showbiz friends". He says:

"We are now absolutely certain that these two planes - the one that supposedly fell into a forest (flight 93 in Pennsylvania) and onto the Pentagon don't exist... those planes are still flying.

"It's an enormous lie," he told Europe 1 radio.

"It's an American missile that hit the Pentagon, they provoked it themselves, they killed fellow Americans.

"Usually one learns of these things 30 years afterwards. We know it now," he went on.

Mr Bigard, who has staged shows to a full house in Paris' football stadium, le Stade de France, added: "We are beginning to seriously consider that neither Ben Laden nor al Qaeda were responsible for September 11."

In a press conference today, a reporter asked White House Press Secretary Dana Perino about the administration’s ongoing efforts to find Osama bin Laden, calling him the “mastermind” of 9/11. Perino interrupted the reporter, claiming bin Laden was not the true “mastermind” of the attacks:

PERINO: No, Khalid Sheikh Mohammed was the mastermind of 9/11, and he’s sitting in jail right now.

I suggest readers might want to back to that link above:

The attack on Afghanistan was based on the claim that bin Laden was behind the attacks, and the 9/11 Commission's report was written as if there were no question about this claim. But neither the Bush administration nor the Commission provided any proof for it.

Two weeks after 9/11, Secretary of State Colin Powell, speaking to Tim Russert on "Meet the Press," said he expected "in the near future . . . to put out . . . a document that will describe quite clearly the evidence that we have linking [bin Laden] to this attack." But at a press conference with President Bush the next morning, Powell reversed himself, saying that although the government had information that left no question of bin Laden's responsibility, "most of it is classified." According to Seymour Hersh, citing officials from both the CIA and the Department of Justice, the real reason for the reversal was a "lack of solid information."

That same week, Bush had demanded that the Taliban turn over bin Laden. But the Taliban, reported CNN, "refus[ed] to hand over bin Laden without proof or evidence that he was involved in last week's attacks on the United States." The Bush administration, saying "[t]here is already an indictment of Osama bin Laden" [for the attacks in Tanzania, Kenya, and elsewhere]," rejected the demand for evidence with regard to 9/11.

The task of providing such evidence was taken up by British Prime Minister Tony Blair, who on October 4 made public a document entitled "Responsibility for the Terrorist Atrocities in the United States." Listing "clear conclusions reached by the government," it stated: "Osama Bin Laden and al-Qaeda, the terrorist network which he heads, planned and carried out the atrocities on 11 September 2001."

Blair's report, however, began by saying: "This document does not purport to provide a prosecutable case against Osama Bin Laden in a court of law." This weakness was noted the next day by the BBC, which said: "There is no direct evidence in the public domain linking Osama Bin Laden to the 11 September attacks. At best the evidence is circumstantial."

After the US had attacked Afghanistan, a senior Taliban official said: "We have asked for proof of Osama's involvement, but they have refused. Why?" The answer to this question may be suggested by the fact that, to this day, the FBI's "Most Wanted Terrorist" webpage on bin Laden, while listing him as wanted for bombings in Dar es Salaam, Tanzania, and Nairobi, makes no mention of 9/11.

When the FBI's chief of investigative publicity was asked why not, he replied: "The reason why 9/11 is not mentioned on Usama Bin Laden's Most Wanted page is because the FBI has no hard evidence connecting Bin Laden to 9/11."

Whenever the Commission had cited evidence for bin Ladin's responsibility, the note in the back of the book always referred to CIA-provided information that had (presumably) been elicited during interrogations of al-Qaeda operatives. By far the most important of these operatives was Khalid Sheikh Mohammed (KSM), described as the "mastermind" of the 9/11 attacks. The Commission, for example, wrote:

Bin Ladin . . . finally decided to give the green light for the 9/11 operation sometime in late 1998 or early 1999. . . . Bin Ladin also soon selected four individuals to serve as suicide operatives. . . . Atta---whom Bin Ladin chose to lead the group---met with Bin Ladin several times to receive additional instructions, including a preliminary list of approved targets: the World Trade Center, the Pentagon, and the U.S. Capitol.

The note for each of these statements says "interrogation of KSM."

Kean and Hamilton, however, reported that they had no success in "obtaining access to star witnesses in custody . . . , most notably Khalid Sheikh Mohammed." Besides not being allowed to interview these witnesses, they were not permitted to observe the interrogations through one-way glass or even to talk to the interrogators. Therefore, they complained: "We . . . had no way of evaluating the credibility of detainee information. How could we tell if someone such as Khalid Sheikh Mohammed . . . was telling us the truth?"

An NBC "deep background" report in 2008 pointed out an additional problem: KSM and the other al-Qaeda leaders had been subjected to "enhanced interrogation techniques," i.e., torture, and it is now widely acknowledged that statements elicited by torture lack credibility. "At least four of the operatives whose interrogation figured in the 9/11 Commission Report," this NBC report pointed out, "have claimed that they told interrogators critical information as a way to stop being "-tortured.'" NBC then quoted Michael Ratner, president of the Center for Constitutional Rights, as saying: "Most people look at the 9/11 Commission Report as a trusted historical document. If their conclusions were supported by information gained from torture, . . . their conclusions are suspect."

Accordingly, neither the White House, the British government, the FBI, nor the 9/11 Commission has provided solid evidence that Osama bin Laden was behind 9/11.

In other words, the evidence of Khalid Sheikh Mohammed's alleged guilt was extracted under torture and they have no other evidence. After seven bloody years! And they have nothing - zip - on Bin Laden himself, except a dodgy old video that even the FBI will not vouch for.